The Los Angeles Fire Department operates a number of bureaus that report directly to the Fire Chief. The Chief (formerly called "the Chief Engineer") is the senior administrative and policy manager for the department. Each of the key bureaus is listed below:

The Fire Chief has the power and duty to:

THE FIRE CHIEF OF THE LOS ANGELES FIRE DEPARTMENT 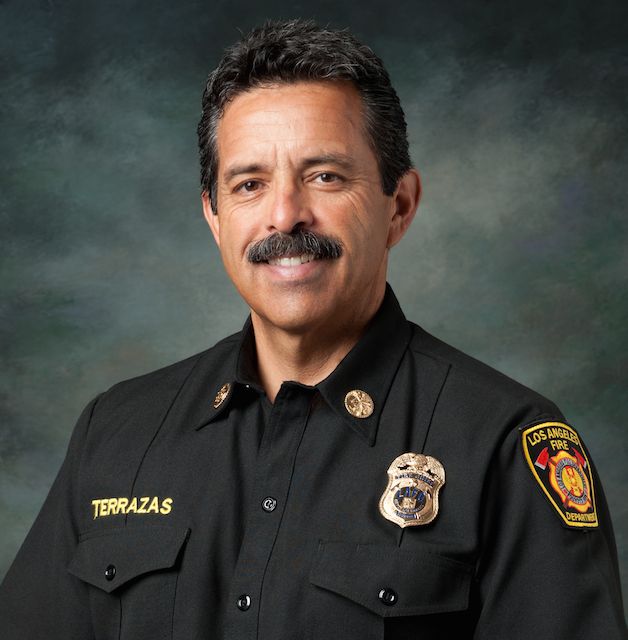 Prior to his appointment, he served as a Chief Officer for 14 years in a variety of field and administrative assignments.  His Chief Officer field assignments included: Battalion18 (West LA), Battalion 7 (East LA), and South Division (South half of the City of Los Angeles).
While at his administrative assignments, he established the Department’s Professional Standards Division (PSD), which upgraded and professionalized the LAFD’s disciplinary system; led the development and passage of the Proposition “F” Fire Station Bond, which enabled the construction of 19 new LAFD Fire Stations; he is the holder of a U.S. Patent for a “Brush Fire Rate of Spread” tool and an Emmy Award of Excellence for production of a public service announcement program.
Since his appointment in 2014, Chief Terrazas has overseen the hiring of hundreds of new Firefighters,  the reopening of previously closed Engine Companies,  the implementation of the Firestat process, the establishment of a new Emergency Medical Services Bureau, the creation of innovative resources such as the Advanced Provider Response Unit and the Fast Response Vehicle, the instituting of the Unmanned Aerial System (Drone) Program, the establishment of the LAFD/LAUSD Firefighter High School Magnet Program and many others.
Chief Terrazas was born in Long Beach, CA, and was raised in nearby Wilmington. He is a graduate of Banning High School, Class of 1978.  He holds a Bachelor’s Degree in Public Administration and a Certificate in Fire Protection Administration from San Diego State University. In 1995, he received Master’s Degree in Public Administration with an emphasis on Human Resource Management from California State University, Los Angeles. He was appointed to the LAFD in December 1983.