At 4:43AM on October 13, 2020 the Los Angeles City Fire Department responded to a reported structure fire at 801 S Crocker Street in Downtown Los Angeles. The fire arriving fire companies found a one story commercial building with fire showing.

An immediate offensive operation began with crews going to the roof for vertical ventilation while fire attack made entry to meet the flames head on. Their aggressive initial efforts achieved good progress against the blaze and it appeared to be extinguished approximately 40 minutes later. However, the 8,794 square foot building, constructed in 1972, contained a heavy fire load created by stacks of rolled fabric and the fire extended into the adjoining building.

With additional resources enroute, the incident transitioned into a two branch operation to more effectively and safely manage the over 120 firefighters on scene spread throughout two separate buildings. Branch One oversaw operations in the original fire unit on Crocker Street while Branch Two covered 722 E 8th Street. Branch Two truck companies went to the roof to conduct vertical ventilation while the engine companies cut open the rolling steel door at the entrance to initiate an offensive fire attack. Heavy fire blew out from the holes cut into the roof, quickly indicating the size of the deep seated fire. The engine companies were hampered in making forward progress by the stacked textiles and these circumstances necessitated a shift to a defensive operation. Meanwhile, Branch One remained in the offensive mode and worked to save as much of the business as possible.

There were no civilian injuries but one firefighter was transported to the hospital for a non-life threatening heat related illness. The LAFD Arson and Counter-Terrorism Section (ACTS) responded per protocol for an incident of this size and are actively investigating the cause of the fire.

This incident also marked the United States debut of the RS3, robotic firefighting vehicle. The RS3 is a remote controlled, track mounted robotic monitor from Textron (Howe & Howe Technologies) which can perform multiple functions, especially at complex and extended commercial and industrial fires where it can be used to keep firefighters out of harm’s way. The RS3 was used in the ‘dozer’ mode to clear debris from inside the structure to facilitate a more effective attack on the fire while eliminating the need to put any firefighters at risk. The RS3 was purchased and donated to the Department by the LAFD Foundation, making it the first use of a robotic firefighting vehicle in the country. 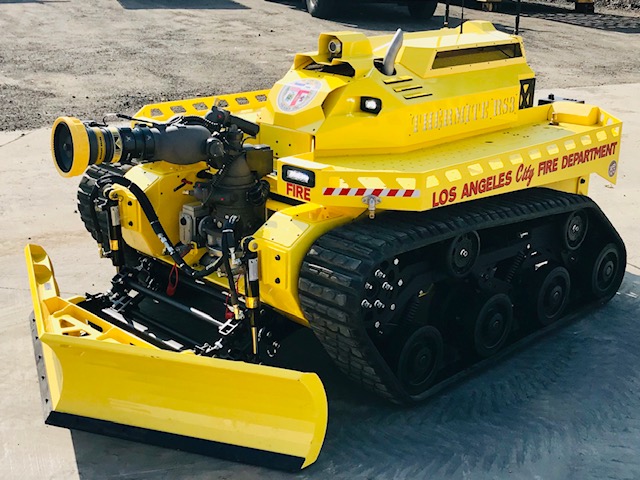